The Moynihan Institute’s South Asia Center announces the 30th Agehananda Bharati Memorial Scholarship competition for graduate students interested in learning about and studying South Asia. The grant can be used for such activities as field work, archival research, creating or purchasing data sets, internship expenses, language training, online courses, and travel that leads to a deeper understanding of South Asia.  Graduate students pursuing PhDs in the Maxwell School are preferred, but students from other schools or colleges may apply.

We anticipate awarding 3-5 grants for 2023. Only activities concerning the countries of South Asia are eligible.  Grants will range roughly from $1000 to $2000.   The awards are competitive.  Proposals will be judged on the basis of (i) the relevance of the proposed activity to learning about South Asia and (ii) the appropriateness and feasibility of the plan in relation to the student's background and qualifications.

The application will be available here. 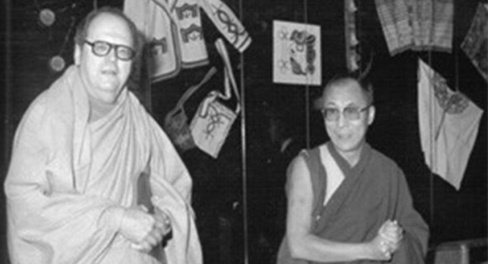 Professor Bharati was born Leopold Fischer on April 20, 1923, in Vienna, Austria. His interest in South Asia began when he was a young boy in Vienna learning classical Sanskrit and Hindi. He graduated Akademisches Gymnasium, Vienna, in 1941 and Oriental Institute and Ethological Institute of the University of Vienna in 1948. He received the name Agehananda Bharati in 1951 when he was ordained in the Dasanami Sanyasi order of Hindu monks. He earned his acharya, the equivalent of a PhD., from Sanyasa Mahavidyalaya in Varanasi, India, that same year.

Early in his career, Prof. Bharati became a noted scholar of Indian culture, teaching linguistics, comparative philosophy, anthropology, and South Asian studies at universities and institutions in India, Japan, Thailand, and the United States. In the 1950s, he was a lecturer in German at Delhi University, a reader in philosophy at Banaras Hindu University in India, a guest professor of comparative religion at the Nalanda Institute of Post-graduate Buddhist Academy in Bangkok, Thailand, Asia Foundation Visiting Professor at the universities of Tokyo and Kyoto in Japan, and research associate for the Far Eastern Institute at the University of Washington in Seattle.

Prof. Bharati joined the Maxwell faculty in 1961 as an assistant professor of anthropology. He was promoted to associate professor in 1964 and to full professor in 1968. He chaired the anthropology department from 1971 to 1977 and was acting chair during the spring semester of 1985. In 1991, he was named the Ford/Maxwell Professor of South Asian Studies and also was presented with the Chancellor's Citation for Exceptional Academic Achievement.

An outstanding Sanskritist who spoke 15 classical and modern European and Indian vernacular languages, he is recognized as one of the leading pioneers in the field of tantric studies. He is perhaps best known for his books The Tantric Tradition (The Hutchinson University Publishers, 1966) and The Ochre Robe (Ross-Erikson Press, 1980). Prof. Bharati also wrote hundreds of articles for publications distributed worldwide, was an editor for several international publications, and presented numerous lectures and papers at national and international professional conventions.