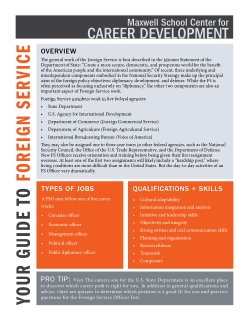 The general work of the Foreign Service is best described in the Mission Statement of the Department of State: “Create a more secure, democratic, and prosperous world for the benefit of the American people and the international community.” Of recent, three underlying and interdependent components embodied in the National Security Strategy make up the principal aims of the foreign policy objectives: diplomacy, development, and defense. While the FS is often perceived as focusing exclusively on “diplomacy,” the other two components are also an important aspect of Foreign Service work.

They may also be assigned one to three year tours in other federal agencies, such as the National Security Council, the Office of the U.S. Trade Representative, and the Department of Defense. New FS Officers receive orientation and training before being given their first assignment overseas. At least one of the first two assignments will likely include a “hardship post,” where living conditions are more difficult than in the United States. But the day-to-day activities of an FS Officer vary dramatically.

A FSO may follow one of five career tracks:

PRO TIP: Visit The careers site for the U.S. State Department is an excellent place to discover which career path is right for you. In addition to general qualifications and advice, there are quizzes to determine which position is a good fit for you and practice questions for the Foreign Service Officer Test.

A Foreign Service career sounds adventurous, challenging, and thrilling—and in many ways FS Officers will agree that it is all of those things. If you care about U.S. Foreign Policy and the image of the United States overseas, you will likely have the opportunity to shape and implement such policy and enhance the U.S. image. If you are interested in learning new languages, becoming acquainted with new cultures, and meeting highly accomplished people from across the globe, you will likely have those opportunities as well. There are notable disadvantages as well, however. Perhaps the first and most significant is the level of competition in getting into the FS. Another is the potential for being placed in insecure conditions, or simply undesirable assignments. Furthermore, as a representative of the U.S., you will be required to publicly defend U.S. foreign policy. Constant travel and living overseas can be viewed as either an advantage or disadvantage, depending on family circumstances and priorities. Below is a list of a few personal questions to consider, followed by a general description of some of the general advantages and disadvantages of a FS career.