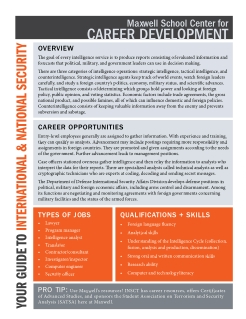 The goal of every intelligence service is to produce reports consisting of evaluated information and forecasts that political, military, and government leaders can use in decision making. There are three categories of intelligence operations: strategic intelligence, tactical intelligence, and counterintelligence. Strategic intelligence agents keep track of world events, watch foreign leaders carefully, and study a foreign country’s politics, economy, military status, and scientific advances. Tactical intelligence consists of determining which groups hold power and looking at foreign policy, public opinion, and voting statistics. Economic factors include trade agreements, the gross national product, and possible famines, all of which can influence domestic and foreign policies. Counterintelligence consists of keeping valuable information away from the enemy and prevents subversion and sabotage.

Entry-level employees generally are assigned to gather information. With experience and training, they can qualify as analysts. Advancement may include postings requiring more responsibility and assignments in foreign countries. They are promoted and given assignments according to the needs of the government. Further advancement leads to management positions. Case officers stationed overseas gather intelligence and then relay the information to analysts who interpret the data for their reports. There are specialized analysts called technical analysts as well as cryptographic technicians who are experts at coding, decoding and sending secret messages. The Department of Defense International Security Affairs Division develops defense positions in political, military and foreign economic affairs, including arms control and disarmament. Among its functions are negotiating and monitoring agreements with foreign governments concerning military facilities and the status of the armed forces.