The Appleby-Mosher Fund provides grants to tenure-track and tenured faculty for research-related expenses such as project initiation (particularly acquisition of materials including data sets), travel to perform research, and conference travel. 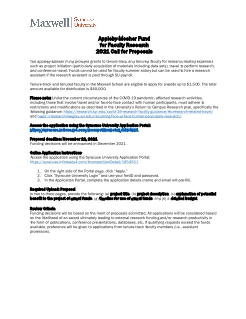 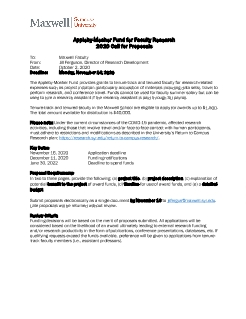 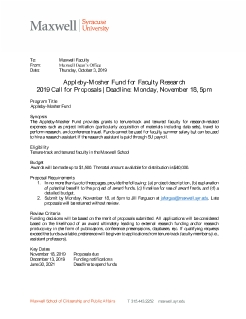 Who Ya Gonna Call? Investigating gender differences in demand for parental involvement

Multiculturalism in a Homogenizing State: Indigenous Politics in Oaxaca, Mexico

Out of Sight, Out of Mind: An Ethnographic Study of Student and Family Homelessness in New York State

Disentangling the impacts between climate change and human disturbance on river functions in the Qinghai-Tibet Plateau, China

Understandings of Democracy and Political Behavior in Botswana and Uganda

Communication Networks and the Circulation of Historical Legends

Delta Democracy: Pathways to Incremental Civic Revolution in Egypt and Beyond

Children of Immigrants in Western Countries

Highlands and Drylands: Water Security, Crop Diversity, and Climate Change in the Altiplano

Sandia: A Mountain, A Family, and the Climate Crisis

The Politics of Allyship: Multiethnic Coalitions and Mass Attitudes Towards Protest

Book Proposal: AI Governance in Our Age of Distrust

The Effect of 9/11 on Arab-American Name Americanization

The Origins of the Mass Party: Primitive Accumulation and Political Representation in Post-revolutionary Mexico and Bolivia

Citizen and empire in democratic athens and republican Rome

Pandemic Politics: How COVID-19 Revealed the Depths of Partisan Polarization

Riverine citizenship and the struggle for water in postwar Bosnia-Herzegovina

Patterns of Dimensionality: Party Competition and Representation in Europe

The importance of a global and comparative perspective on religion

Assessing Morality Patterns of Children and Adults with Spina Bifida

Current Debates in Aging and the Life Course: Public Policy

Riverine citizenship and the struggle for water in postwar Bosnia-Herzegovina

Sound of the commute: Hearing, belonging, and mobility in contemporary Istanbul

Imperial transition in the Arabian Peninsula: Science, state-making, and the history of American empire in the Trucial States

Winter's end: The future of skiing in a warming world

The royal and elite hunt in Korean history

Citizens' understandings and reactions to terrorism, surveys and experiments in the United States, Norway, Finland, and Spain

Descriptive representation in international organizations: The effect of governance reform on IMF legitimacy

Fears of a setting sun: The disillusionment of America's founders

Racial-ethnic differences in educational trajectories for individuals with cognitive impairments: The case of ADHD

The project, politics, and performance of "job-readiness"

“We will not give up Una!” Water politics, pedagogies and infrastructures in Postwar Bosnia

On the stories of men and the substance of women: Courses and cycles through a Guyanese Kali Temple—and beyond

On the effects of the minimum wage on employment, formality, and the wage distribution

The power of identity politics: A behavioral political-economy analysis of policy-making

Citizens and empire in democratic Athens and Republican Rome

Whose river? The Kaveri dispute and political belonging

Citizens' understandings and reactions to terrorism: Surveys and experiments in the United States, Norway, Finland, and Spain

Acting like a state: De facto states and the CONIFA European Cup

2019 round of the chesdata.eu survey on party positions in Europe

The project, politics, and performance of “job-readiness”