Each spring, the Dean’s Office invites applications from Maxwell faculty for summer funding for the graduate assistant of their choice to support preliminary research for and/or preparation of a proposal for external project funding. Successful faculty applicants are expected to submit a related proposal to an external funder and must provide a written report within one year of the issuance of the award. 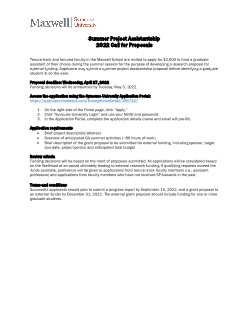 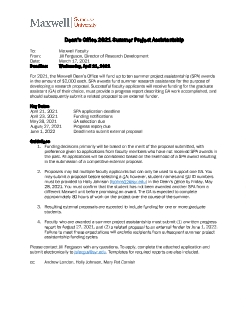 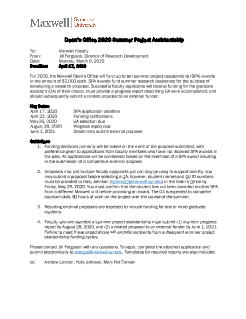 De (Humanizing) War: Artificial Intelligence Weapons and the Future of the Human.

Attitudes Toward Extramarital Relationships in the Context of Spousal Alzheimer's Disease

Politics of childcare in the US: Comparative study of states and cities

The philosophical foundations of data science

Developing standards and practices for verifying qualitative and multi-method research

Andre Ortega, Geography and the Environment

The strength of the family safety net during the coronavirus pandemic

Freedom commons: Entanglements of social and penal policy in housing provisions for the poor

The effect of mergers & acquisitions on multinational firms’ innovation decisions

The project, performance, and politics of job readiness

Religiosity, health, and mortality over the adult life course

Living with cancer at the crossroads: Assessing risks and seeking cures for reproductive cancers in India

Cervical and breast cancer in India: A socio-cultural study

Lobbying, uncertainty, and the ratification of trade agreements

Transportation administration in the borderlands: The moral and the material at the Zambia-Angola Border

Cervical and breast cancer in India: A socio-cultural study

Laboratories of liberalism: The impact of American higher education in the Gulf Arab states

Snow cover, land use, and flood hazard: Understanding the impact of urbanization on local and regional climates and flood runoff

Toward a global repository of free speech jurisprudence

The dehumanization of Black Americans in the contemporary United States

A bioarchaeological and biomolecular approach to intersections of social identities and local biologies at the Historic Spring Street Presbyterian Church, Manhattan (ca.1810-1846

Endogenous politics and the design of international trade institutions

Optimal taxation in a developing economy with limited fiscal capacity

Geographic variation in the impacts of California riparian wildfire

Does a step-gap equal a caregap in the intergenerational relationships of older adults?

The untold story of political prisoners in mid-twentieth century Mexico, and the life of a forgotten hero: The case of Jacinto Lopez and his fight for rural Mexico

Why are some majority Muslim countries more religious than others?

The rise of non-communicable diseases (NCDs) in middle-income countries: The role of TNGOs

Global governance and public administration: The future of the discipline

The impact of race-neutral school assignment on school segregation

The prospects of institutional transfer: An analysis of U.S. security assistance contracts as an inducements for developing Afghan National Security Forces

In the absence of the state: Contests over professional childbirth care and the role of international organizations in post-war Angola

The new Chinese presence in the Anglophone Caribbean

The political incorporation of religious minorities in Canada and the U.S.

Why are they initially over-represented, but ultimately under-represented?: An investigation of the attainment of a science/engineering bachelor’s degree for racial minorities

What difference do TNGOs make to Indigenous struggles in Brazil and Guatemala?

The children of Spring Street: A stable isotope study

The changing cartographies of embodiment in Postcolonial Ghana

Globalization and entrepreneurship in developing Asia

Between making a living and making a place: Understanding immigrant/native-born tensions in new destinations

Knowledge incubation in the public sector

Mining, water, and rural livelihoods in the Bolivian Andes